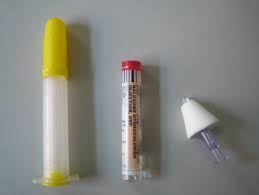 Life-Saving Use of Naloxone – At approximately 10:54 a.m. on Wednesday, April 23, 2014, Lacey Township Police Sergeant Paul J. Sullivan responded to a Heroin overdose incident at a Forked River residence. Upon his arrival, he found a 30-year-old female unresponsive with very shallow breathing and a faint pulse. Sgt. Sullivan administered the Naloxone spray. The victim subsequently became responsive and alert within only minutes of being administered the medication. Lacey Township First Aid Squad transported the patient to the Southern Ocean County Hospital for further treatment.

The Naloxone program was implemented within the Lacey Township Police Department just two weeks prior to this incident. Currently, the officers on patrol are equipped with Naloxone nasal spray kits in the event of a Heroin or opioid pill overdose. As in this incident, the administration of the medication in a timely manner can quickly reverse the deadly effects of an overdose.