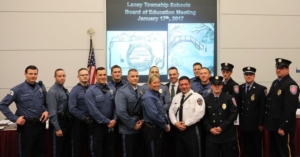 The above picture depicts members of the Lacey Township Police Department and the Forked River Fire Department during the Lacey Township Board of Education School Board meeting held on Tuesday evening, January 17, 2017. During the meeting, Police Officers Anthony Sarno and Christopher Meyler, along with Forked River Firefighter Edward Barker, Jr., were honored for saving a woman’s life. All three are Lacey High School Alumni.

On Tuesday evening, January 17, 2017, the Lacey Township Board of Education honored Police Officers Anthony Sarno and Christopher Meyler, along with Forked River Firefighter Edward Barker, Jr., for saving an elderly woman from her burning home November 25, 2016. During the Lacey School Board meeting, High School Principal Greg Brandis spoke about the incident and honored all three alumni for their actions, providing each with a certificate.  Several officers from the Lacey Township Police Department, along with members of the Forked River Fire Department, Mayor Peter Curatolo and Committeeman Gary Quinn were present. Officer Sarno graduated in 2003, Officer Meyler in 2007, and Edward Barker, Jr in 2010.

The incident occurred on Friday, November 25, 2016, at 12:09 a.m. Officers Christopher Meyler, Anthony Sarno, and Julie Barcalow responded to the 1800 block of Serpentine Drive in Forked River, in regard to a fire alarm. The fire alarm notification was followed by a second call, from a neighbor reporting heavy smoke coming from the residence. Upon Officer Meyler’s arrival, he observed a large concentration of flames coming from the rear of the ranch-style home. Officer Meyler located two adult female occupants (visitors from Massachusetts), who advised that they were able to exit from the fire, however, the 81-year-old female homeowner was still inside. Officer Meyler soon discovered the woman was trapped inside the attached garage. Officer Meyler broke an exterior garage window and entered inside in an attempt to reach the homeowner.  Officers Julie Barcalow, Anthony Sarno, and Scott Keefe arrived on scene to assist.  Officer Sarno entered the garage, along with two Forked River Volunteer Firemen, Rob Anderson and Edward Barker, Jr.   The four of them were able to successfully transfer the woman homeowner outside through the garage window.  The homeowner, and the two female visitors from Massachusetts, ages 64 and 35, were transported to Community Medical Center for smoke inhalation.  Officers Meyler and Sarno were also taken to the hospital to be treated for smoke inhalation and minor injuries.

In addition to Officers Anthony Sarno and Christopher Meyler, both Officers Julie Barcalow and Scott Keefe were recognized on December 9, 2016, by Chief Michael C. DiBella for their actions involving the November 25, 2016 fire. In addition, I would like to acknowledge that Forked River Firefighter Rob Anderson was as instrumental as all in saving the woman’s life. Furthermore, I need to acknowledge Forked River Fire Chief Raymond Brandmahl for his actions November 25, 2016.

I would like to thank the Lacey Township Board of Education for taking the time to honor the involved police officers and firefighters. Additionally, I would like to once again honor all of the involved police officers and firefighters who helped save this woman’s life back on November 25, 2016. In addition to our officers, our Emergency Services Personnel are truly an asset to Lacey Township and I thank them.

The below photos depict the certificates provided by the Lacey Township High School to Officers Anthony Sarno and Christopher Meyler. 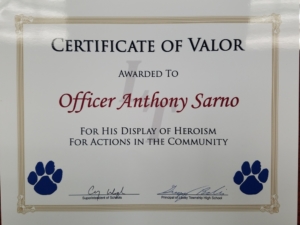