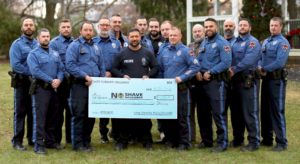 The above picture depicts the “No-Shave November” after-photo taken on the evening of Friday, November 30, 2018.

No-Shave November is a fundraiser in which people put down their razor in order to raise awareness and funding for cancer charities. During the month of November 2018, residents in Lacey Township found some of their police officers and emergency services personnel to be on the “hairy side.”  Uniformed police officers and Emergency Services personnel were sporting beards and mustaches all in the name of fighting cancer.

During the after-photo I advised my officers that I was going to extend the No-Shave policy for Lacey Township Police until 11:59 p.m. on December 31st, 2018.

I want to thank all of my police officers, and the members of our emergency services for their dedication to No-Shave November.  As of January 1st, 2019, the Lacey Township Police Department grooming policy will be back in full effect until next year’s No-Shave November. If anyone has any questions in regard to this initiative you may contact Sergeant George Resetar at the Lacey Township Police Department at 609-693-6636 ext. 2590