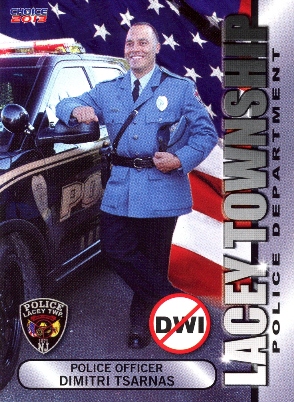 Award Presentation: Officer Dimitri Tsarnas of the Lacey Township Department is the recipient of the 2013 Kimberly Smith-Ames DWI Prevention Award for his distinguished and consistent efforts in DWI enforcement. Officer Tsarnas has been recognized as a standout among his peers in law enforcement throughout Ocean County and the State of New Jersey. The Kimberly Smith-Ames DWI Prevention Award is presented annually by the Ocean County Police Traffic Officer’s Association to one officer in recognition of that officer’s diligent and consistent efforts to combat the dangers of impaired driving.

The Kimberly Smith-Ames DWI Prevention Award (History): On October 7, 1998, Kimberly Smith-Ames was killed at the age of 23 by an extremely reckless intoxicated driver in Beachwood. The tragic accident not only claimed her life, but also the life of her unborn child. The award was created by Edward and Carol Smith in memory of their daughter Kimberly to honor the hard work and determination of an Ocean County police officer who has demonstrated a strong commitment toward the effort to stop drunk driving.