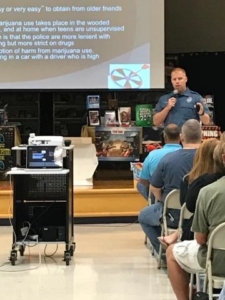 The above picture depicts Lieutenant Paul Sullivan, Jr., presenting the “Parents who Host Lose the Most” program at the Lacey Middle School on the evening of September 29, 2016.

Parents who Host Lose the Most. Don’t be a party to teenage drinking.

The Lacey Township Police Department in coordination with the Ocean County DART Prevention Coalition (Robert Wood Johnson Barnabas Health) presented a program titled, “Parents who Host Lose the Most” at the Lacey Township Middle School Back to School Night, on the evening of September 29, 2016.

“Parents who Host Lose the Most”  is a public awareness program educating communities and parents about the health and safety risks of serving alcohol at teenage parties. The program takes place at state and local levels, concentrating on celebratory times for youth, including, but not limited to, homecoming, prom and graduation and other times when underage drinking parties are prevalent.

The program encourages parents and the community to send a unified message that teen alcohol consumption is unhealthy, unsafe and not acceptable.

Underage drinking is hazardous to the health and safety of our children and parents play a major role in their child’s decision to make healthy choices. Statistics show that teenagers are five times (5X) more likely to develop an alcohol problem if they start drinking before age 15.

Since the program began, it has been requested for replication in all 50 states, Canada, Japan, the Virgin Islands and Puerto Rico. In 2001, Parents Who Host, Lose The Most: Don’t be a party to teenage drinking received the Center for Substance Abuse Prevention’s Promising Prevention Program Award. While laws vary from state to state, the campaign’s message is a universal one: It is illegal, unsafe and unhealthy for anyone under 21 to drink alcohol.

The Lacey Township Police Department will continue to increase its partnerships with drug and alcohol awareness  and prevention organizations.