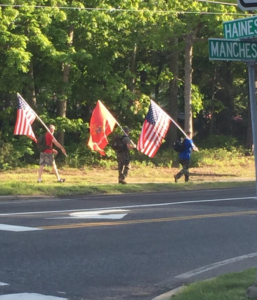 Department News – On Sunday, May 29, 2016 at 7:00 a.m., Lacey Police Sergeant Samuel Della Sala, Detective Robert Surtees, and Officer Patrick Watkins met behind police headquarters to start their Memorial “Hump” to Honor the Fallen. “Hump” is a term used in the Marines for what others would call a march or hike with weighted packs and equipment. Each officer proudly served in the United States Marine Corps. They departed police headquarters and embarked on the 4-hour, 10-mile hump to honor those who paid the ultimate sacrifice in service to this country. 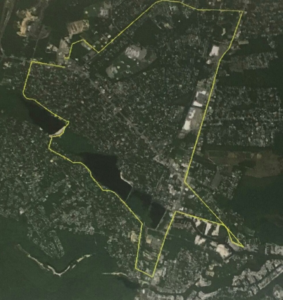 arine Corps flag along a designated 10-mile path within Lacey Township. The route began at police headquarters and ended 4 hours later at the Memorial within Bicentennial Park next to the Lacey Township Municipal Building. The route started at the rear of police headquarters and continued through the back of Gille Park onto Manchester Avenue, then turned east to Route 9 in Lanoka Harbor. Once on Route 9, they marched south to East Lacey Road in Forked River where they turned left onto East Lacey Road to the area of the Captain’s Inn, then they turned around and marched west onto Bay Avenue back to Route 9. They continued on Route 9 south to Taylor Lane, then to the rail trail northbound to Lakeside Drive South. Once on Lakeside Drive South, they marched westbound around the lakes to Deerhead Lake Drive, then Lakeside Drive North westbound to Newark Avenue toward Lacey Road. They completed the hump taking Lacey Road eastbound to the Memorial on Lacey Road at Bicentennial Park within the municipal complex.

While the hump was comp 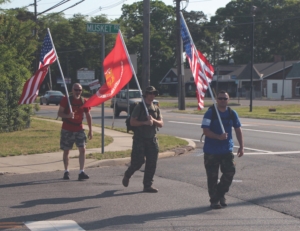 leted to honor all fallen heroes of the United States Armed Forces, the Marine veterans included special, personal items in their packs in honor of specific fallen Marines whom they served with in combat.

The veterans were humbled by the positive feedback they received from the public while on their hump. Motorists were honking, waving, stopping to express thanks, while residents in the neighborhoods were taking pictures and videos, etc., and offering refreshments as well as very positive expressions of support.

This was the first of other memorial “humps” to honor the fallen that the officers have planned for the future. The Lacey Township Police Department is currently staffed with twelve (12) military veterans among the ranks. Their military service includes the Marine Corps, Army, Navy, and Air Force. All of the members of the Lacey Township Police Department extend a sincere expression of thanks to our veterans and all who have served in the United States Armed Forces, as we honor those who have fallen on this Memorial Day.   – Chief David A. Paprota, Ed.D.