On Tuesday, June 12, 2018, Officers Michael Verwey, Michael Baldasari and Jason Lee were honored at the 2018 MADD New Jersey Law Enforcement Recognition event at the Rutgers College in New Brunswick, NJ. Both officers were honored by the Mothers Against Drunk Driving (MADD) organization for their consistent and diligent DUI enforcement efforts.  The officers serve within the uniformed patrol division of the Lacey Township Police Department and are known locally for their consistent efforts in DUI enforcement.

Drug interdiction and DUI enforcement have been set as a priority for all sworn officers and detectives of the police department. The dedicated officers and detectives of the Lacey Township Police Department have made over 70 drug arrests as well as 38 DUI arrests in the first five months of 2018. These efforts will continue and will be intensified as we move forward. Officer Michael Verwey Officer Michael Baldasari and Officer Jason Lee have made significant contributions to the department’s proactive enforcement efforts as recognized by the MADD organization 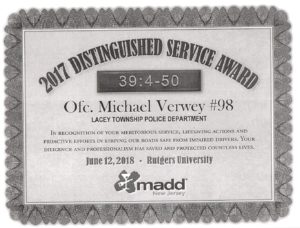 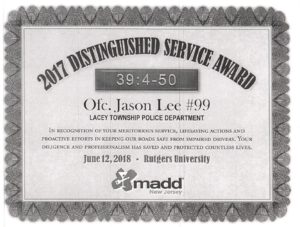