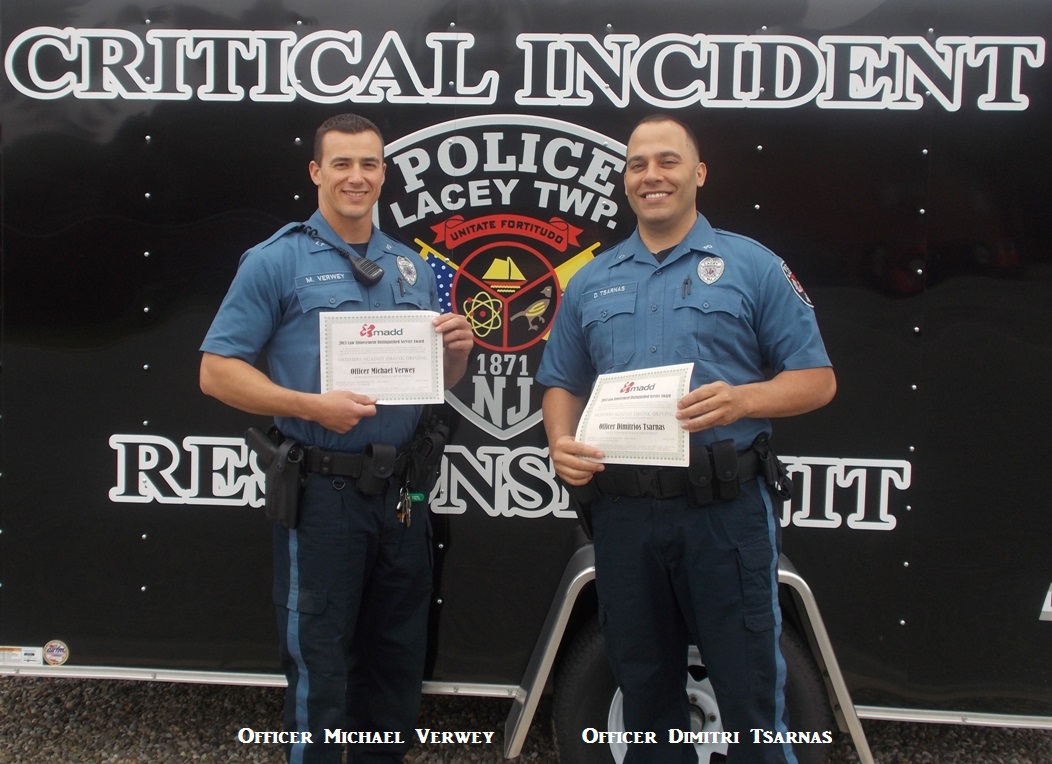 Department News – On Wednesday, June 11, 2014, Officer Michael Verwey and Officer Dimitri Tsarnas were honored at the 2014 MADD New Jersey Law Enforcement Recognition event at the Middlesex County College in Woodbridge, NJ. Both officers were honored by the Mothers Against Drunk Driving (MADD) organization for their consistent and diligent DUI enforcement efforts. Both officers serve within the uniformed patrol division of the Lacey Township Police Department and are known locally for their drug interdiction efforts and their consistent DUI enforcement. Officer Tsarnas is a certified Drug Recognition Expert (DRE) who assists departments around the county as part of a county-wide DRE team. Likewise, Officer Michael Verwey is a highly trained traffic investigation expert who is a member of the Ocean County Fatal Accident Support Team (FAST). In addition to their patrol assignments, both officers are on-call 24 hours a day for their expertise as part of DRE and Accident Investigation shared services agreements with the Ocean County Prosecutor’s Office.

Drug interdiction and DUI enforcement have been set as a priority for all sworn officers and detectives of the police department. The dedicated officers and detectives of the Lacey Township Police Department have made over 100 drug arrests as well as 57 DUI arrests in the first five months of 2014. These efforts will continue and will be intensified as we move forward. Officer Michael Verwey and Officer Dimitri Tsarnas have made significant contributions to the department’s proactive enforcement efforts as recognized by the MADD organization.