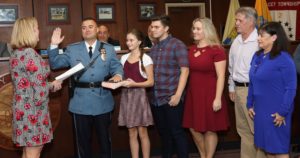 The above photos depict Lacey Township Police Detective Sam Della Sala being promoted to the rank of Police Sergeant during the September 12, 2019 Township Meeting.

The Lacey Township Police Department is proud to announce the promotion of a veteran police detective. On the evening of Thursday, September 13, 2019 (last evening), during the Township meeting, Detective Sam Della Sala was promoted to the rank of Sergeant.

Sergeant Della Sala graduated from the Lacey Township High School in 2000. Soon after he enlisted in the United States Marine Corps where he served four years on active duty in the Infantry and Security Forces. Prior to receiving an Honorable Discharge, he was awarded numerous medals, awards, and certificates of commendation for service in combat as a Sergeant during Operation Enduring Freedom. When he returned home to New Jersey, he began working as a Federal Corrections Officer at Fort Dix.

Sergeant Della Sala has extensive training in areas including but not limited to Narcotics Investigations, Active Shooter Response, ALICE, and Firearms.  He comes with the utmost Integrity and professionalism, and is dedicated to serving the community of Lacey Township.

Sergeant Della Sala is married to his wife Jennifer of 18 years and they have two children.

Sergeant Della Sala will now be assigned as the Unit Commander for the Lacey Police Department’s Drug Enforcement Unit (S.E.T). He will also be pursing his Bachelor of Arts Degree.

I would like to thank my entire staff, Township Administrator Veronica Laureigh, Mayor Timothy McDonald and all the members of the Lacey Township Committee for supporting Sergeant Della Sala’s promotion. 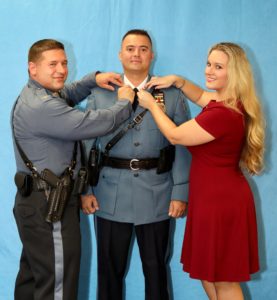