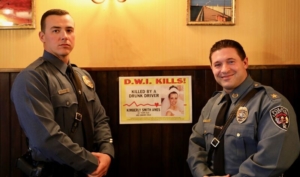 The above picture depicts Officer Michael Verwey (left) after receiving his 2016 Nomination/Recognition, for being a top finalist in the 2016 Kimberly Smith Ames Award. The award was presented by the Ocean County Police Traffic Safety Officers Association and the Smith family.

Officer Michael Verwey was recently honored for his efforts to get drunk drivers off the roads. He was recognized for being among the finalists for the 2016 Kimberly Smith Ames DWI Prevention Award, which was presented on Thursday, December 15, 2016, by the Ocean County Police Traffic Safety Officers Association and the Smith family.

Officer Verwey was a 2014 Kimberly Smith Ames award winner, and a previous recipient for the Mothers Against Drunk Driving Award. In addition, while employed for the Burlington City Police Department, he participated in the National Law Enforcement Challenge Project, sponsored by the International Association of Chiefs of Police and received second place. Officer Verwey is regularly recognized by his peers for his dedication to DUI Enforcement. His nomination for this year’s Kimberly Smith Ames Award was well deserved. Officer Verwey is an asset to our agency and I look forward to his continued commitment to protecting the citizens of Lacey Township from drunk drivers.

The award is named in honor of Kimberly Smith Ames, who was tragically killed by a drunk driver on October 7, 1998, at just 23 years old. The crash not only took Kimberly’s life, but that of her unborn child. This award was created by Ed and Carol Smith in memory of their daughter, and to honor the hard work and determination of an Ocean County Police Officer who has demonstrated a strong commitment toward the effort of stopping drunk driving in their jurisdiction.

The top honor for 2016 went to Officer Michael Kelly of the Jackson Township Police Department.